The fuller Lab
Ongoing Research Themes in the Lab 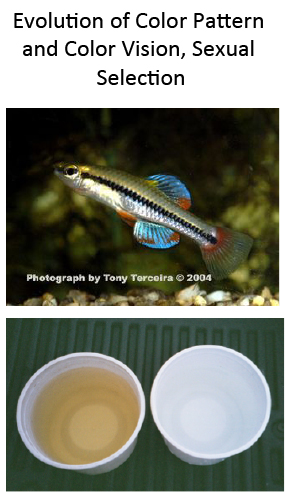 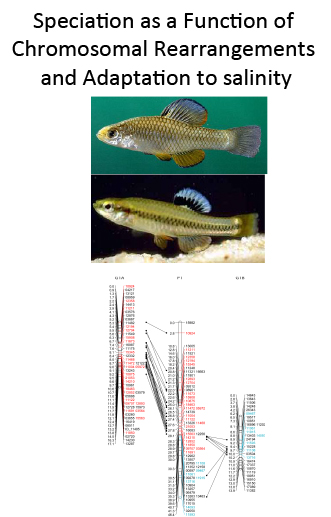 2.  Speciation in Killifish.  The lab is also interested in the evolution of reproductive isolating barriers between killifish.  Particularly, we are studying the roles of natural selection and chromosomal rearrangements in promoting speciation in this group.  Bluefin killifish are found primarily in freshwater whereas the sister species is euryhaline and is found in fresh, brackish, and marine waters.  The two species also differ in a chromosomal rearrangement.  Hence, the system provides an excellent framework for asking whether natural selection and/or chromosomal speciation is taking place.  In our past work, we have also documented high levels of reinforcement between the two species where there is selection to avoid heterospecific matings in areas of sympatry.  A former post-doc, Genny Kozak, has also shown the reinforcement between species may be leading to 'cascade reinforcement' among populations within species.  In other words, selection favoring increased preferences to mate with members of the same species may also make individuals more likely to mate with individuals from their own populations (over foreign populations).  Michelle St. John is currently following up these findings.

We are also developing genomic resources for this system.  In past work, the lab generated genetic linkage maps for the two species and discovered a major chromosomal rearrangement.  Emma Berdan phenotyped a number of hybrid offspring to determine the areas of the genome involved in reproductive isolation and adaptation to fresh versus salt water.  We are currently sequencing the genomes of both species. 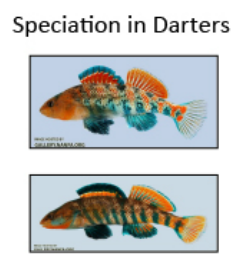 3.  Speciation in Darters.  The lab is also interested in the roles of female choice, male choice, male competition, and reinforcement in speciation in darters.  We are particularly interested in speciation in the rainbow darter and Ceasia (formerly, orangethroat darter) group.  Muchu Zhou and Rachel Moran have been working on this project.  Much to our surprise, the brilliant color pattern appears to serve mainly in male/male competition and in male recognition of conspecific versus heterospecific males.  Males also appear to play the predominant role in behavioral isolation.  We are investigating the potential for reinforcement to play a role in this system.
Powered by